The Brash Beginnings of the New Mexico Gay Men’s Chorus

Among the items of discussion was naming the group. Not enough people at this initial meeting were far enough out of the closet for it to have “gay” in the title. It was Jon Hull, also in attendance but only for support and not as a singer, who suggested the name Brash Ensemble, which everyone immediately liked and was adopted by consensus.

That fall, weekly rehearsals began at the home of Bill Boyer and his partner. The first public performance was at the December meeting of Common Bond. In 1983, the Brash Ensemble performed in the first “Caught in the Act” variety show which was held at a short-lived dance club called Numbers After Hours near Carlisle and Menaul. The chorus subsequently performed in most of the CITA shows in the 80s and 90s. The Brash Ensemble was also a highlight of the 1983 Gay Pride Concert “Classics and More” which demonstrated that Albuquerque had many accomplished gay composers and musicians. In the early years Brash Ensemble rehearsals were held on Sunday evenings mostly at the First Congregational Church at Lomas and Girard NE.

In October 1984, John Roberts, a professional musician who had founded a gay men’s chorus in Montgomery, Alabama, became the Brash Ensemble’s music director. Also that year, Stringer travelled to Denver for the National Conference for Directors and Managers of the Gay and Lesbian Association of Performing arts Groups (GALA). He attended workshops on fundraising, conducting techniques, music exchange and board management. At that time, GALA had 50 member choruses, some of whose budgets exceeded $100,000 a year. Stringer commented, “The gay choruses movement is now beginning to have a political impact on music publishing and other musical institutions.”

The Ensemble’s next music director arrived in May 1986. An accomplished singer, Robert Morris majored in voice in college and subsequently taught and conducted voice. He had also performed in Town Hall and Carnegie Hall in New York City.
The Brash Ensemble’s performances in 1987 included the party for the Desert States Lesbian and Gay Conference (April); Church of Religious Science and Caught in the Act variety show (both in June). Common Bond picnic in Bataan Memorial Park (July) and First Unitarian Church (August).
​
In the spring of 1987, the Ensemble’s sixth year, Stephen Montoya became music director. There had already been renewed discussion about changing the group’s name to include “gay” in the title. By that time many of the choruses around the country had Gay as part of their name. Montoya thought it important for the group to be visible as gay men and the name Brash Ensemble did not communicate that. Discussions were somewhat contentious and there were threats of some people leaving the group if the name was changed. Then there was the issue of being called Albuquerque Gay Men’s Chorus vs. New Mexico Gay Men’s Chorus. Since there was a significant Santa Fe contingent at that time, New Mexico won out as being more inclusive of all of the group’s members. When fall rehearsals started, the name was officially changed to the New Mexico Gay Men’s Chorus.

Concurrent with the name change, chorus member Tony Bucci came up with the name “Turquoise Trail Performing Arts” for the organization when they applied for nonprofit status. At that time Alan Stringer was quoted in Common Bond Ink newsletter: “Gay men’s choruses are becoming extremely popular across the country. They represent the gay community to the community at large and play to large mixed audiences. We can do that here too.”

And indeed the New Mexico Gay Men’s Chorus has done just that. In subsequent years, it has grown to become one of the most popular performing arts organizations in the state. Its December holiday concerts have particularly broad crossover appeal attested to by their large ticket sales. It’s a long-standing cultural treasure for our community, birthed at Common Bond.​ 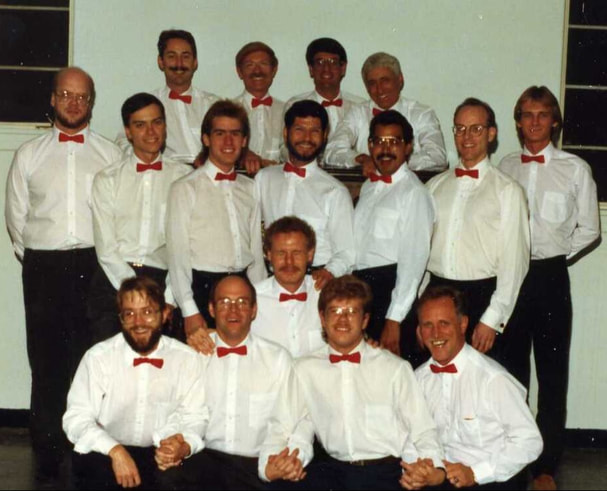 ​Thanks to passionate collector Bennett Hammer and LGBT archivist Barbara Korbal, an extensive collection of the Common Bond Ink newsletter and the subsequent Out! newsmagazine are available at the Center for Southwest Research in the UNM Zimmerman Library. Both publications were produced by Roy Reini and we are deeply indebted to all those involved in those publications for providing us with a chronological framework and many essential details in preparing this first dedicated history of Common Bond.

Information on this website was obtained from first and second-hand accounts and may not constitute the most up-to-date or factual information. Any reference or links to other third-party sources are only for the convenience of the reader, user or browser. The views, thoughts, and opinions expressed by third parties belong solely to the author, and are not necessarily shared by Common Bond New Mexico Foundation.