With the encouragement of the Common Bond Board of Directors and a growing number of pledges, the Committee of 100 sought to find a new location that would incorporate some of the features identified in the recent poll. The selection committee, headed by Albuquerque Realtor® and Common Bond member Bennett Hammer, finally chose a building at 107 Tulane Drive SE, a half block south of Central Avenue.

Common Bond moved into that new Community Center in July of 1986. While not providing all the features requested by those who filled out Tom Neal’s questionnaire, it provided larger meeting rooms, a homier atmosphere, and was easily accessible in the Nob Hill area.

The new space included a small room which housed the Common Bond Gay and Lesbian Information Line and New Mexico AIDS Services’ AIDS Hotline, a room for small meetings and the library; and a larger room for meetings of groups up to thirty people. A refrigerator, microwave oven and kitchen items made the new center more home-like. Caroline Monie was the initial manager for the center, followed by Donna Storey.
​
Volunteer Tony Bucci recalls, “The Center on Tulane was a converted old house with a living room, kitchen, two former bedrooms, and a bathroom with the original tub!  We would set up tables and chairs in the main room and play board games, have snacks, watch movies, or just hang out. The front “bedroom” next to the main room became a meeting room with a couple of old sofas and a TV. There were often new people dropping in, so the Friday Night Out social gathering was a way to welcome them. I attended regularly and at some point became the group’s coordinator. I arrived early to set up and always had a punch bowl and snacks. Sometimes we planned themes for upcoming nights, such as T-shirt night, toga party, poster making for Pride, Halloween, dessert night, game tournaments, and so on. We also allowed local artists to display their art at the Center and sometimes we hosted receptions for them.”

“As I became more involved with planning events at the Center, I took on the role of Center Manager. I opened up the Center when groups were meeting there or when maintenance was being done. The Tulane location was an older building that had its issues, but I wanted it to be welcoming to new people or anyone from the community who needed a safe space to gather.”

Writing in Common Bond Ink in October 1986, Ross Porter answered the question, “$20! Where does it go?” He said “membership in Common Bond is considered by many as a mere giveaway – twenty dollars to the community as a vague kind of self-interest. And it’s true that what many may consider to be the main benefit of membership, this newspaper, is available free at the bars, bookstores and popular spots around town.”

“Beyond that vague feeling of doing something to benefit the gay and lesbian community, members of Common Bond can be proud that their twenty-dollar yearly membership dues are actually put to good use. Three major on-going uses of membership dues are the phone bill for the Common Bond Gay Information and Support Line, insurance under which the Community Center is operated, and the payment of utilities at the Community Center. Other on-going costs support Common Bond’s programs: xeroxing, data processing, refreshments for monthly programs, publication materials for Common Bond Ink, and printing of promotional flyers and membership forms, etc.”

“Since inception, it has been the policy of Common Bond to make major programs pay for themselves or generate money. For example, this monthly publication pays for its printing through advertisements; Pride Week pays for itself through sales of T-shirts and other premiums; the Committee of 100 pays for the Community Center lease through monthly contributions; and the new Common Bond Lesbian Helpline raised its own money for advertising and promotion.”

“The use of volunteer labor increases the value of membership dollars many-fold and offers a broad range of involvement opportunities for members. As a result of these money-saving approaches, Common Bond is able to spend money occasionally on one-time acquisitions which are vital. Shelving and cards with which to run the Common Bond Library is one example. The VCR and television at the Community Center, which is used to conduct aerobics classes, play Sunday Night Movies and other tapes in the Videotape Library, is another example.”

“On occasions when money is needed to bring a special guest to Albuquerque (such as Harry Britt or Karen Clark), people whose message is important but who may not by themselves function as fundraisers, Common Bond membership funds can be used and the members invited to hear the guest’s message.”

“Paying for all these activities at Common Bond requires more than the $20 yearly membership dues A host of fundraising efforts, from plays to pledge nights are conducted each year to build on the foundation of membership revenues.”

In August 1987, a feature article in Common Bond Ink noted that the Committee of 100 who were charged with operating the Community Center and those who used the Center were for the most part two totally different groups. The principal users of the Center tended to be young, just coming out, and relatively poor. The Center supporters tended to be in their 30’s and 40’s, professional, comfortable with their sexual orientation, and anxious to help others. Alan Stringer, chairman of the Committee of 100, said, “When you consider all the activities that are conducted at the Common Bond Center, and all the people that we have helped in the last year, and the fact that we have been able to do that for between ten and eleven thousand dollars, the Common Bond Community Center is a real bargain.”

From its start, one of Common Bond’s goals was always to provide a positive environment for people to come out. During the previous year, the new Community Center on Tulane had been a particularly valuable tool in achieving that goal. Melissa Sallee, the Community Center’s most recent manager said, “I have been surprised at how the Community Center has been an attraction for young gay men and women. Despite numerous efforts by Common Bond in the past to meet the needs of gay and lesbian people under 25, nothing has succeeded as well in providing them with an alternative to the bars and streets and a positive comfortable environment of their own.” 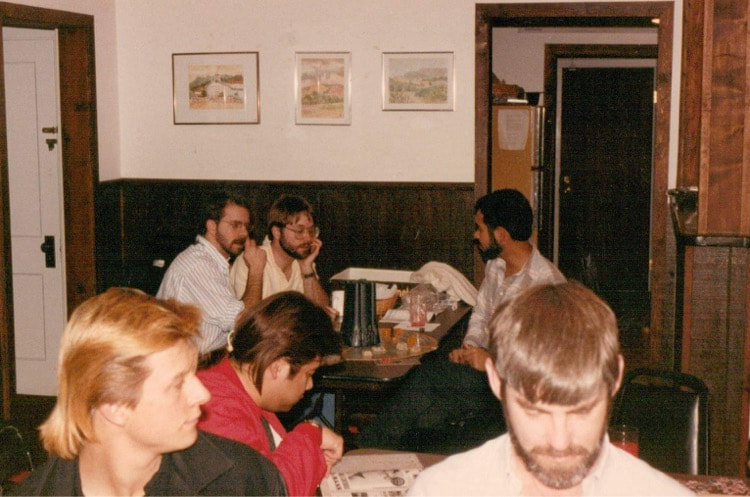 Over its initial 12 months, social activities and support groups made up the bulk of Center use. According to Common Bond Ink’scalendar listings for that period, there had been an average of 14 social events per month at the Community Center and an average of 13 support group meetings per month. There were, in fact, over 500 scheduled events in the building during its first year of operation.

However, by May 1988, the Community Center had been operating at a financial deficit for some months primarily due to the number of people who has not paid their pledges to Friends of the Center (formerly the Committee of 100). Common Bond operated one of the few gay and lesbian community centers in the country that was totally financed by pledges. The One-in-Ten youth group that had met every Saturday for over a year had become one of the largest and most active groups meeting at the Center, yet most of those young people were unable to make a financial contribution to the upkeep and maintenance of the Center beyond what they gave on a regular basis at their group meetings.

Despite this, growth was needed. In June 1988, Tom Neal, chairperson of the Center Committee, said “We need a bigger and better community center, but we cannot get one without greater support from the entire gay and lesbian community.” The Tulane facility was having trouble accommodating all the groups wanting to use it, and it wasn’t large enough to hold large community meetings or youth dances. It was not unusual for four or more different groups to request space within the Center during a single evening. In addition to Common Bond-sponsored groups, New Mexico Outdoors, New Mexico Gay and Lesbian Political Alliance, Adult Children of Alcoholics, and numerous other support groups all requested space in the Center. In addition, there was a real need for a place where gay and lesbian people could simply drop in to meet other people and pick up community information.